STORY: I pretty much failed at my New Year’s Resolution as soon as it was supposed to get off the ground. I wanted to complete one thing every week. Finish reading a book, draw a picture, clean a room, unpack boxes–I wanted one thing to get done every week, and by the end of the first week of January, I hadn’t finished anything. I had just moved in to a new apartment, though, and I had just begun falling for my gentlemanfriend, and I figured I’d had enough distractions to allow myself a one week buy. By the end of the second week of January, I had again completed nothing. I still had unpacked boxes, I’d made no progress in Les Miserables, and the only time I picked up a pencil was for class.

So began the worst semester to date of my college career. I proceeded to turn in virtually all of my German homework late (if I did it at all), turn in the majority of my Life Writing essays late, read exactly one entire play out of eight for Renaissance Drama, complete two out of perhaps ten blogs for Multimedia Composition, and drop my Philosophy course because I was so behind in all of my other classes. I would say never in my life have I been so unfocused on school, but I could argue that my last semester of high school was about as bad–I almost didn’t graduate because of that one.

It does not bode well when you start a year wanting to finish more things and instead spend the first third of the year finishing significantly less than normal. Things I’ve accomplished from start to finish this year: 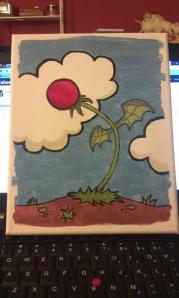 It took me about seven hours. Literally nothing else comes to mind.

So that’s around seven-ish hours of clear productivity out of four, going on five months. It’s impressive, really.

Fortunately, not finishing things continued to bother and interest me during this time, so I was able to mine the problem for my academics–now, here we are.